What is Considered ‘Illicit Discharge’?

An illicit discharge is defined as any discharge to the municipal separate storm sewer system (MS4) that is not composed entirely of storm water, except for discharges allowed under a NPDES permit or waters used for firefighting operations.  Illicit discharges occur through either direct connections, such as piping mistakenly or deliberately connected to the storm drains, or indirect connections such as infiltration from cracked sanitary sewer pipes and degradation of older manholes.  Illicit discharges also result from ordinary, everyday citizen behavior.  Washing a vehicle with soaps and detergents on a driveway or other paved surface, over-fertilization of lawns, vehicle maintenance and associated fluids, household pet waste and improper disposal of trash all can introduce potentially harmful pollutants into the stormwater system which discharges directly into our community’s waterways.

Why is Illicit Discharge a Problem?

As a result of illicit connections and improper behavior, contaminated water enters storm drains or directly into local waters.  The City’s sanitary sewer system is treated before it is reintroduced into waters; the City’s storm sewer system is not.  Illicit connections and improper behavior may be intentional or may be unknown to the owner.  Regardless, current residents, visitors and those performing work in the City have a responsibility to ensure our waters stay as free of pollutants as possible.

Pollutants from the sources below are harmful to the environment and degrade the beauty and health of our community.  We need to keep them out of our lakes, rivers and wetlands.  For advice of proper handling of the following, please contact the Andover Stormwater Department.

The following discharges are allowed in the City of Andover.

Andover’s IDDE program is designed to prevent contamination of ground and surface water supplies through the monitoring, inspecting and removing of these illegal non-stormwater discharges.  An essential element of these programs is the City’s ordinance granting the authority to inspect properties suspected of releasing contaminated discharges into storm drain systems.  Another important factor is the establishment of enforcement actions for those properties found to be in noncompliance or that refuse to allow access to their facilities.  Click here to view the City’s Stormwater related ordinances.

The City of Andover’s stormwater system consists of over 1,200 drain inlets.  These inlets include curb inlets located on streets and area inlets located primarily in residential yards.  The Stormwater Department inspects 25% of the system’s inlets each year to ensure proper operation and to identify possible sources of illicit discharge.  In other words, each point of access for stormwater runoff to enter the underground system is visually inspected at least once every four years.  Ideally, problems such as sediment deposits, leaves, grass and trash are identified before harmful effects are realized.  The Stormwater Department works closely with the City’s Wastewater and Streets Departments to remedy any issues identified during routine annual inspections.

The Andover Stormwater Department maintains a map of illicit discharge cases and results of routine system inspections.  The interactive map allows users to find illicit discharges and inspections near specific addresses, view pictures and review case details including the discharge observed and the action taken by City employees to eliminate it.  Click the thumbnail below to be taken to the full-size map. 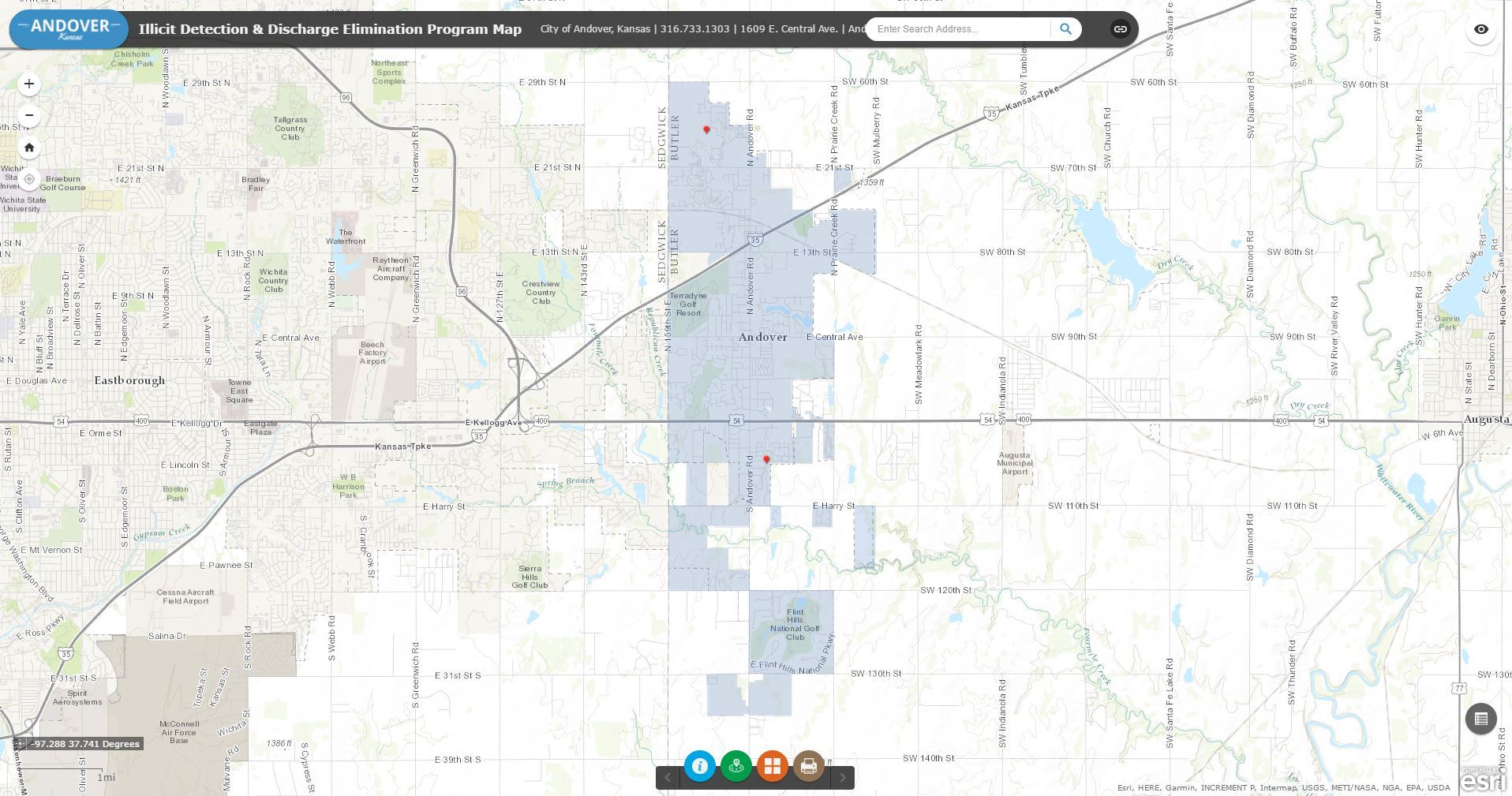 Although we are consistently monitoring the City for illicit discharges, we often receive calls from the public.  If you are concerned regarding any potential illicit discharge, please call (316) 733-1303 ext. 424.  Upon receiving a concern, the City will investigate the problem and get it eliminated accordingly.