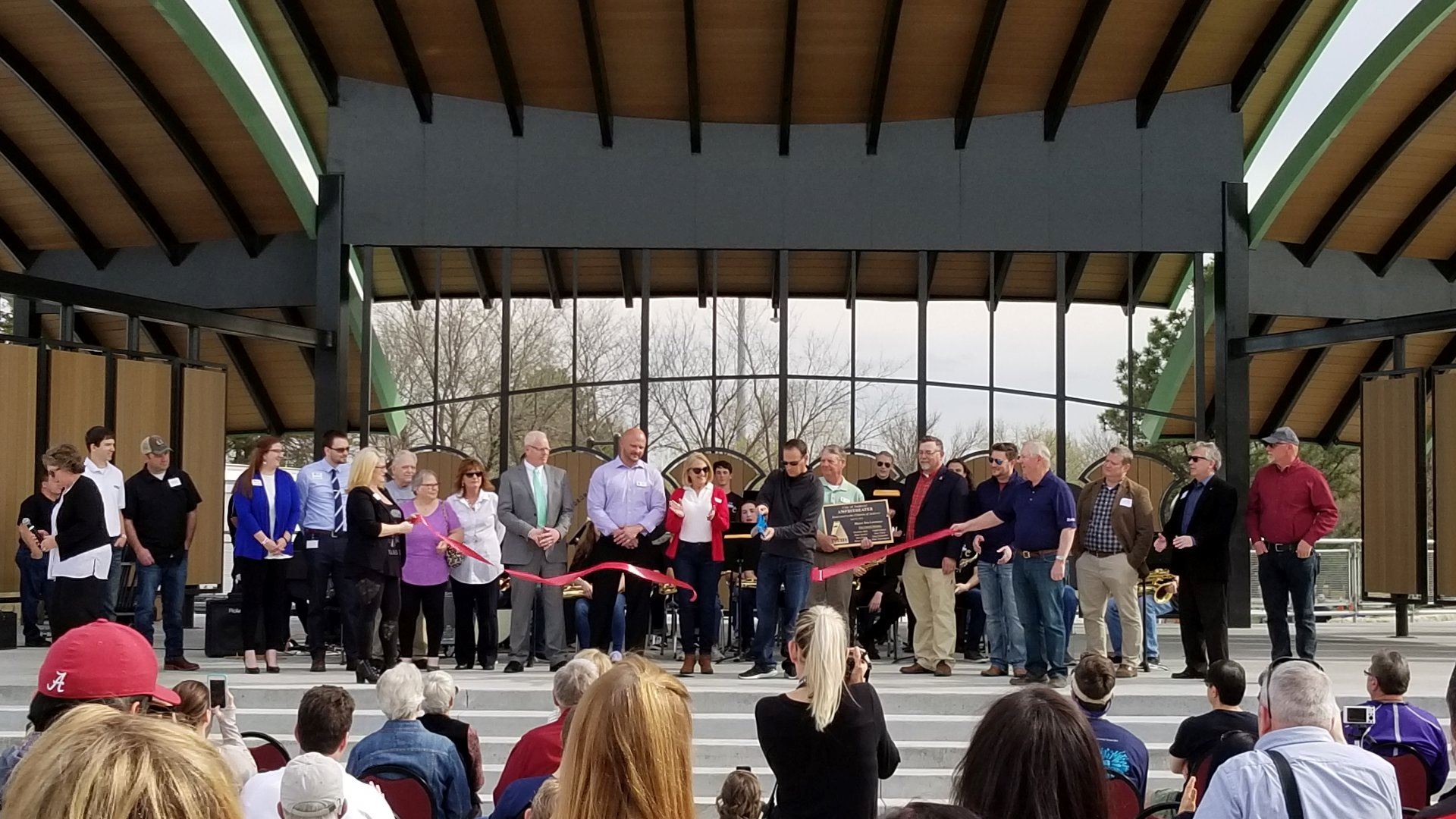 April 26th, 2018 - Ribbon Cutting and Dedication Ceremony of the Capitol Federal Amphitheater® to the citizens of Andover. 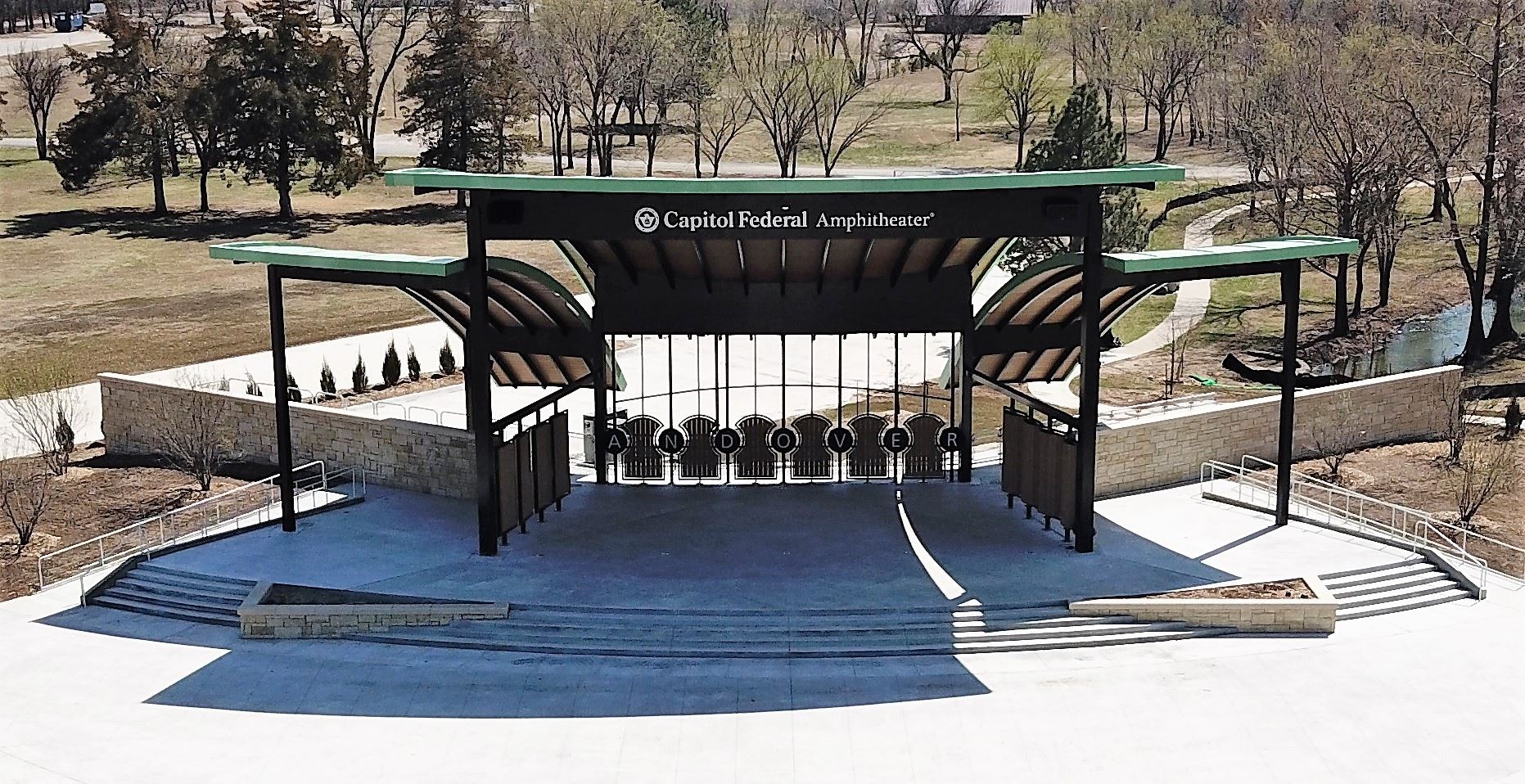 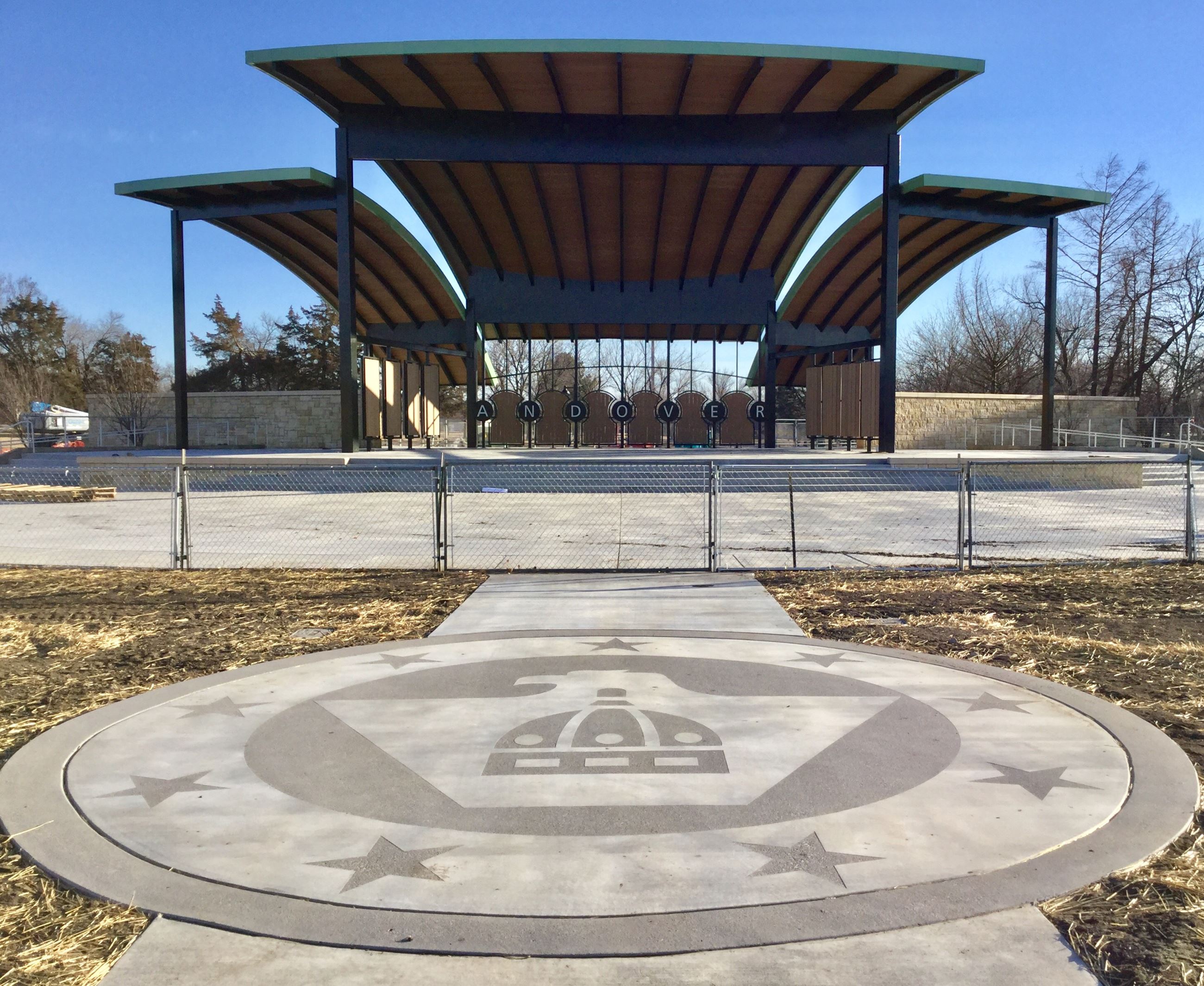 February 13, 2018 - We are oh so close to being done! Modifications had to be made in an effort to keep the birds from gathering on the trusses.  A final walk through will be happening in the near future and hopefully everything will be wrapped up very soon so that we can get #AmpedInAndover! 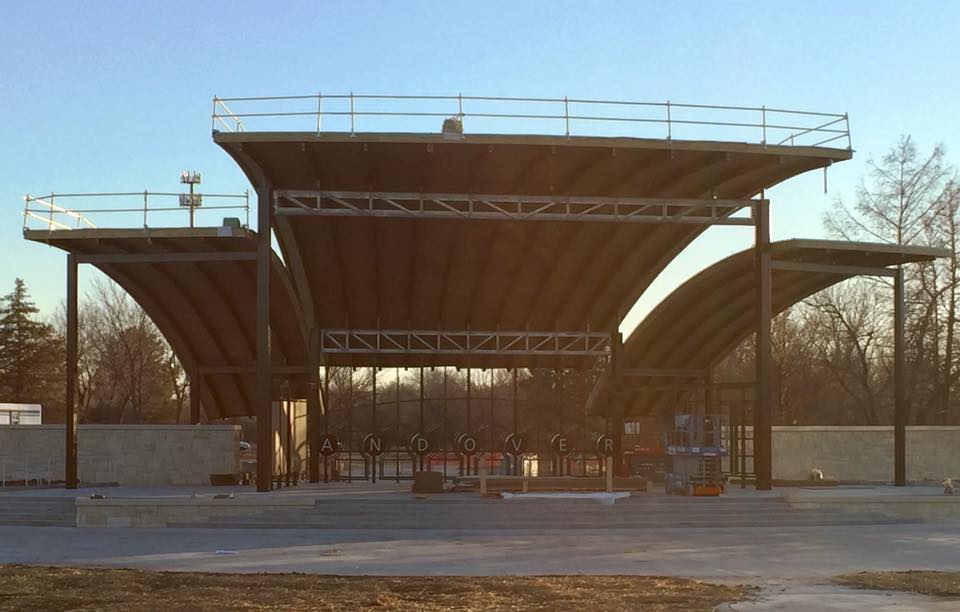 December 8th,  2017 - The A-N-D-O-V-E-R sign at the back of the amphitheater has been completed making our structure more unique.  More final design details will happen in the next few weeks as the construction is scheduled to be wrapped up by the end of 2017! 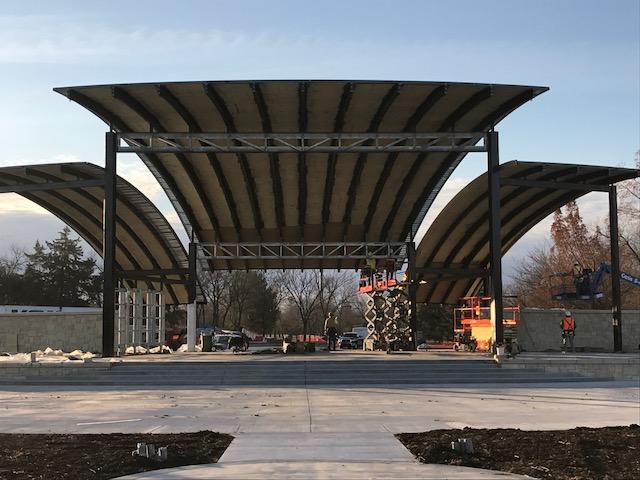 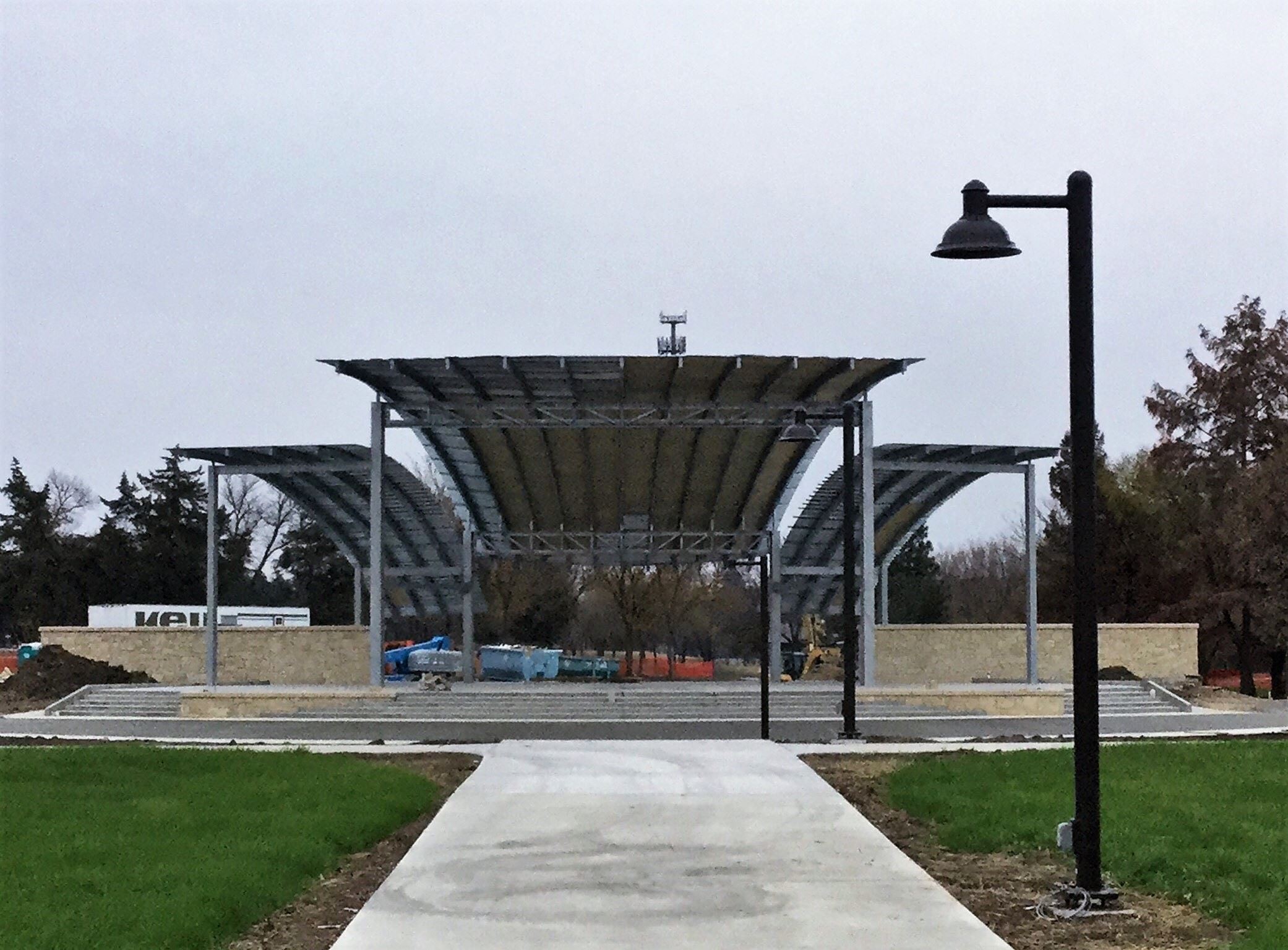 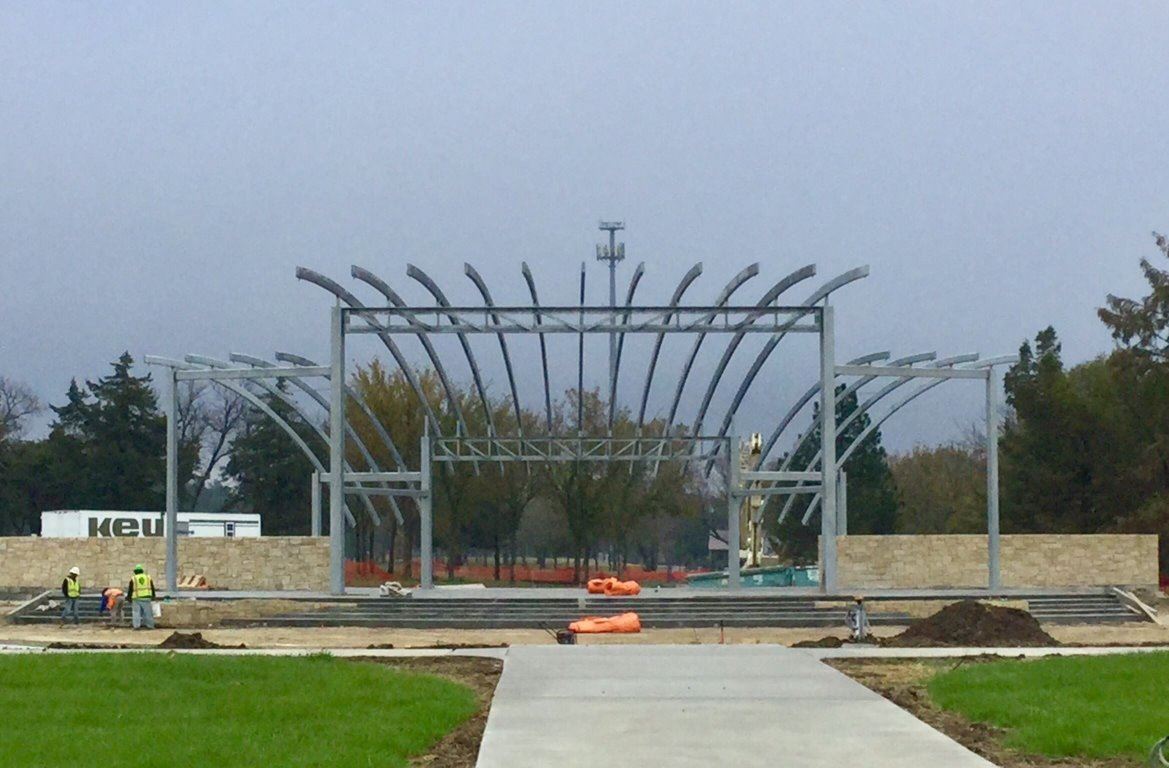 November 13th, 2017 - Things are coming along despite the drizzles and damp fall weather.  We've got a roof over our heads, well the start of one, anyway!  And look at that new light pole! Lights have been installed in various locations around the venue, making sure the walkway will be lit at night!

November 2nd, 2017 - The "skeleton" of the structure is nearly completed.  You can also see that the concrete steps and stage have been poured. 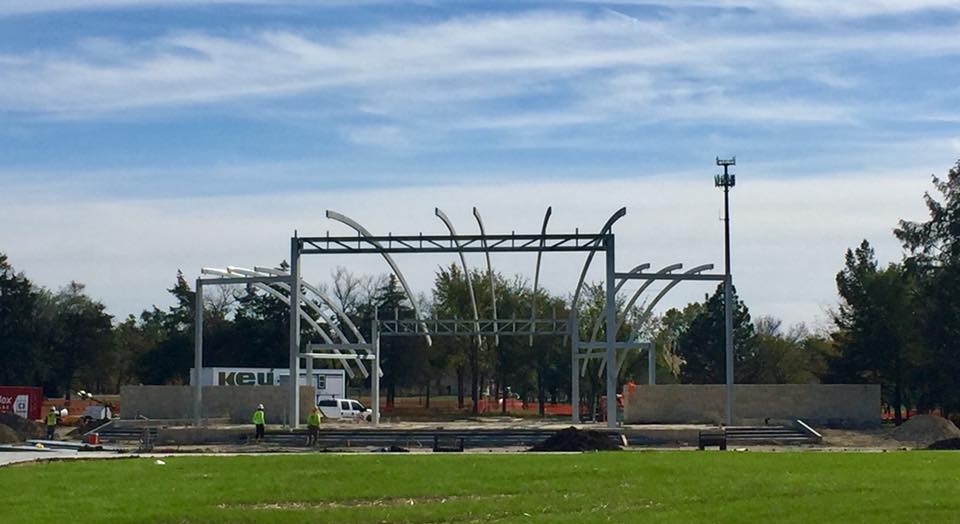 October 19th, 2017 - Forms are starting to be put into place. The grass is coming in nicely! 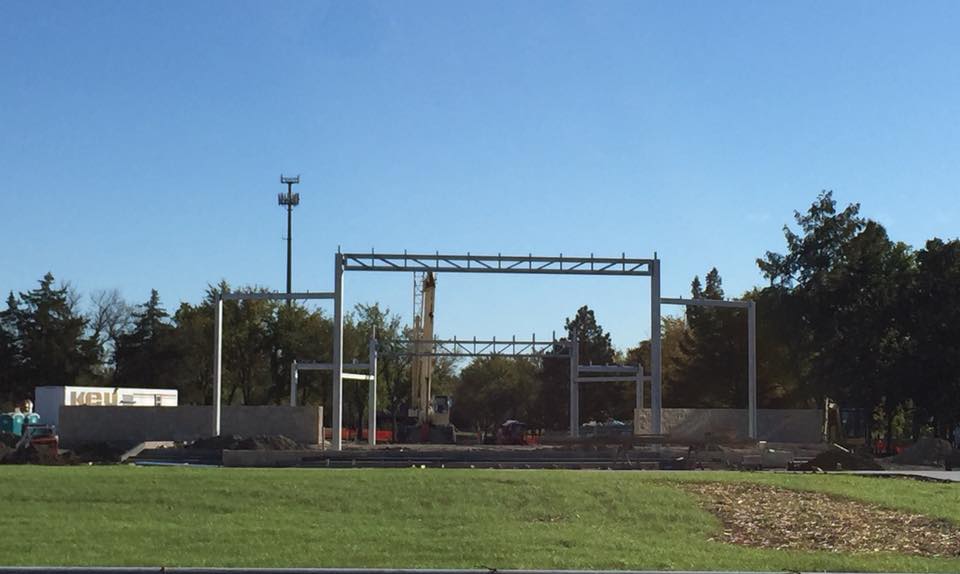 October 16, 2017 - The structure appeared out of nowhere! The Key Construction crew has been hard at work! 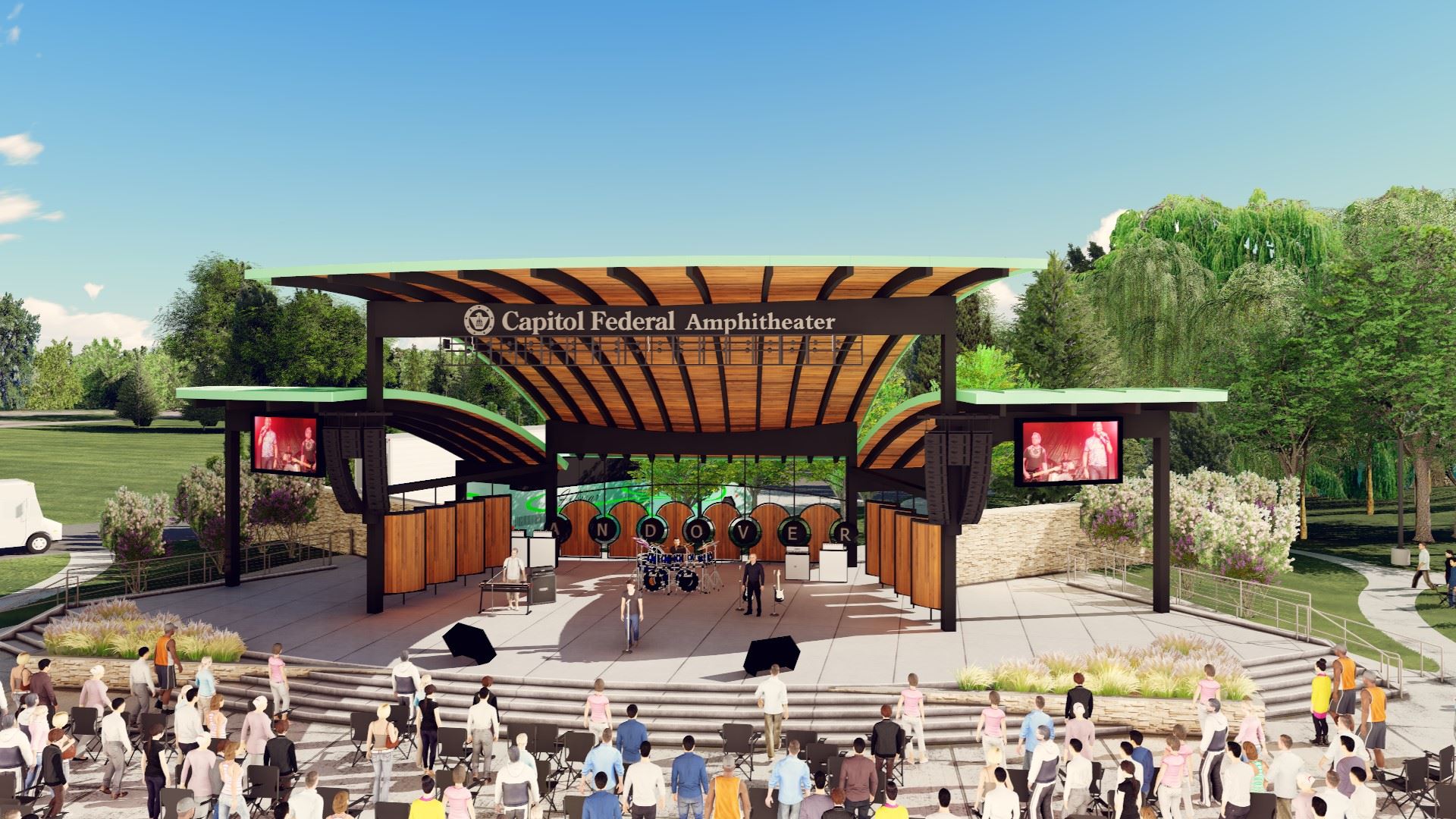 The City of Andover and the banking institution announced a 10-year deal for naming rights to the amphitheater at last night’s City Council Meeting.  The $750,000 sponsorship will be paid in annual installments over the course of the 10-year agreement.

Construction on the amphitheater started in early July and should finish this year.  The amphitheater will not only provide a versatile venue but a beautiful attraction for the Andover community.  It will include a dock, control area, and a flat concrete seating area in front of the stage, all surrounded by a slightly graded grass bowl.

“On behalf of the City Council, the Convention and Visitors Bureau and the citizens of Andover, we would like to thank John B. Dicus, Chairman, President & CEO of Capitol Federal®. A partnership between one of the state’s strongest banking institutions and one of the state’s best cities is destined for success,” stated Mayor Ben Lawrence.

CapFed® CEO Dicus said, “Capitol Federal is proud to have been a local business in Andover for almost 10 years. We are excited to continue to plant our roots in the community, and the new Capitol Federal Amphitheater is an affirmation of our True Blue® commitment to the people of Andover.”

During Tuesday night’s meeting, Mayor Lawrence also credited Westar Energy for “Powering the Amphitheater” by agreeing to provide the needed electricity to the site as an in-kind donation. “It is an exciting time in Andover. We literally have private partners lining up to be a part of this project and first class facility,” Lawrence shared.

“Westar Energy is proud to partner with the City of Andover in bringing a source of positive energy to the new Amphitheater!  We look forward to more great partnerships in the future," said Bridget Bowman, Business Manager. 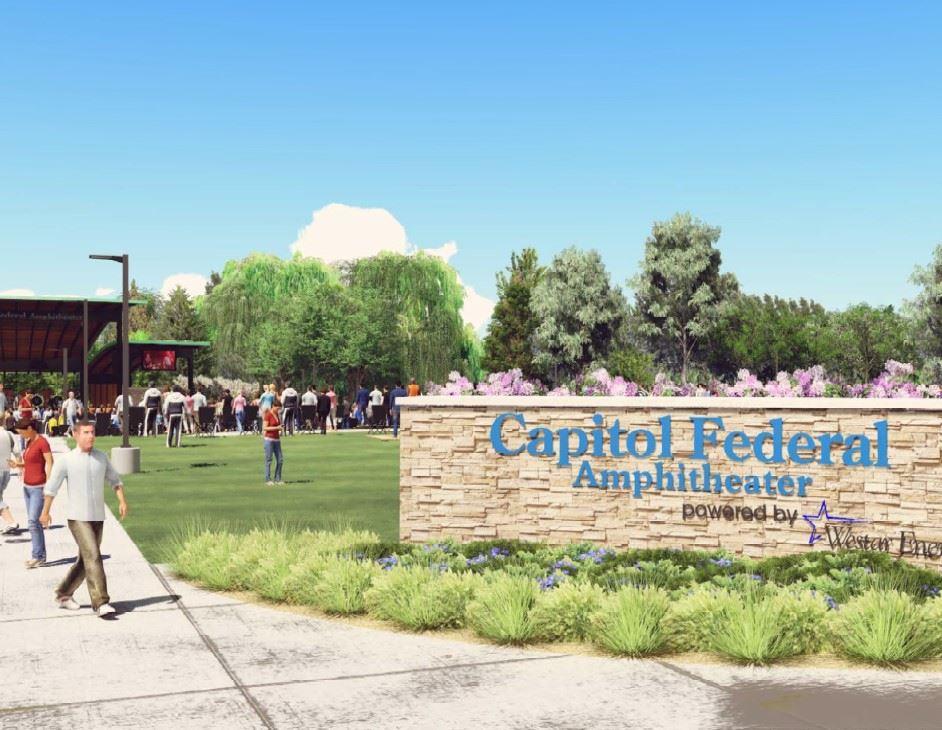 Amphitheater in the Making

The design for the municipal Amphitheater was put together by the Andover Amphitheater Design Committee working closely with LK Architecture to finalize the plans. Members on the design committee represented Andover from a variety of backgrounds, including members from City Council, City Hall, CVB, and the Andover community.The project will be constructed by Key Construction and is estimated to take under 1 year to finish, with completion occurring before the 6th annual Concert in the park in 2018. 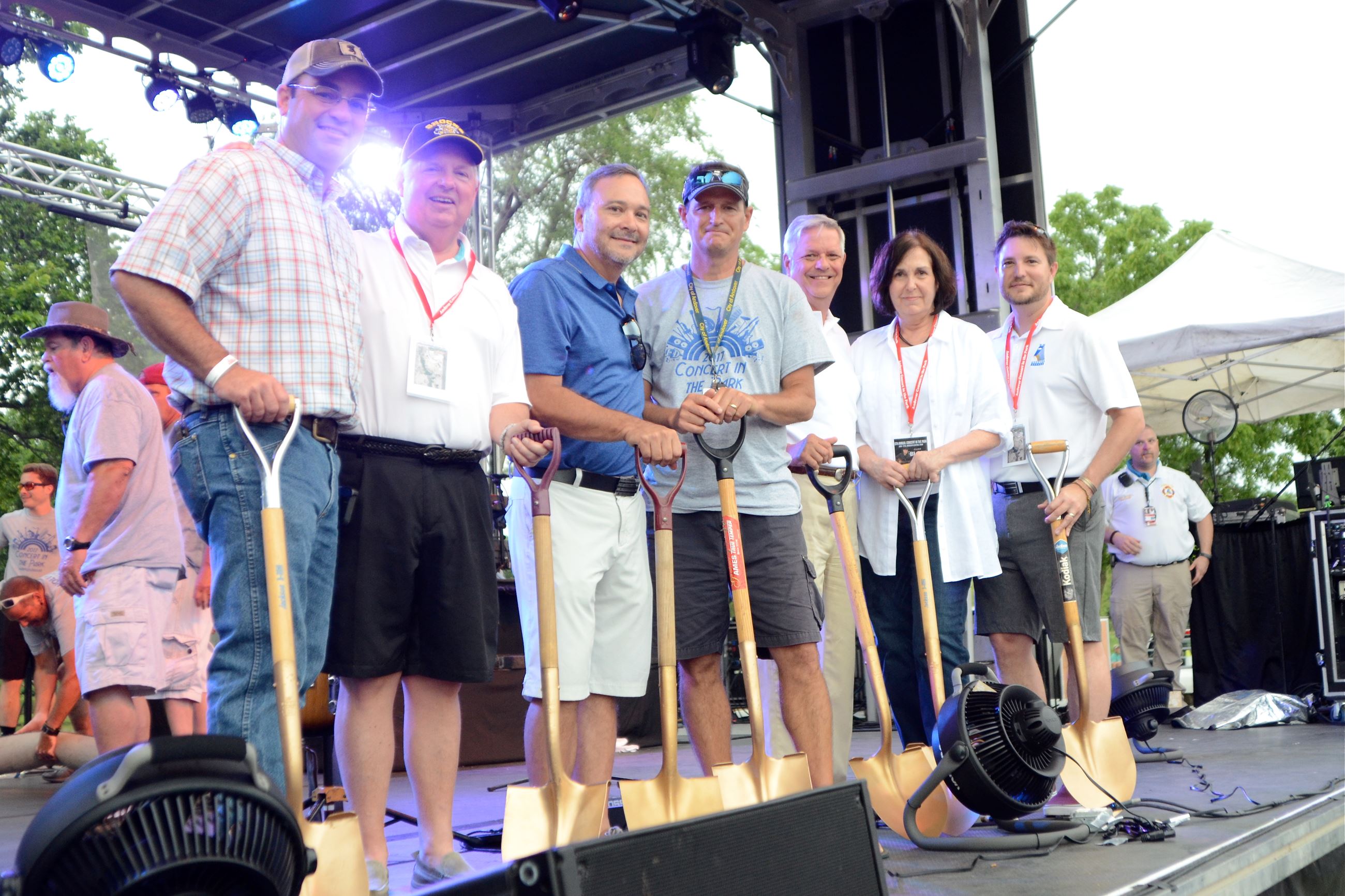 The design includes aspects of the surrounding buildings and use of the natural features in the park. The goal was to blend the Amphitheater’s aesthetics, function, and size seamlessly into the park without altering the park’s natural beauty.  Seating will total approximately 10,000 people. Location of the Amphitheater will be just Southwest of “The Lodge” in Central Park at 1607 E. Central Ave. Facing North, this will put the setting summer sun out of the eyes and to the side of both performers and audience. 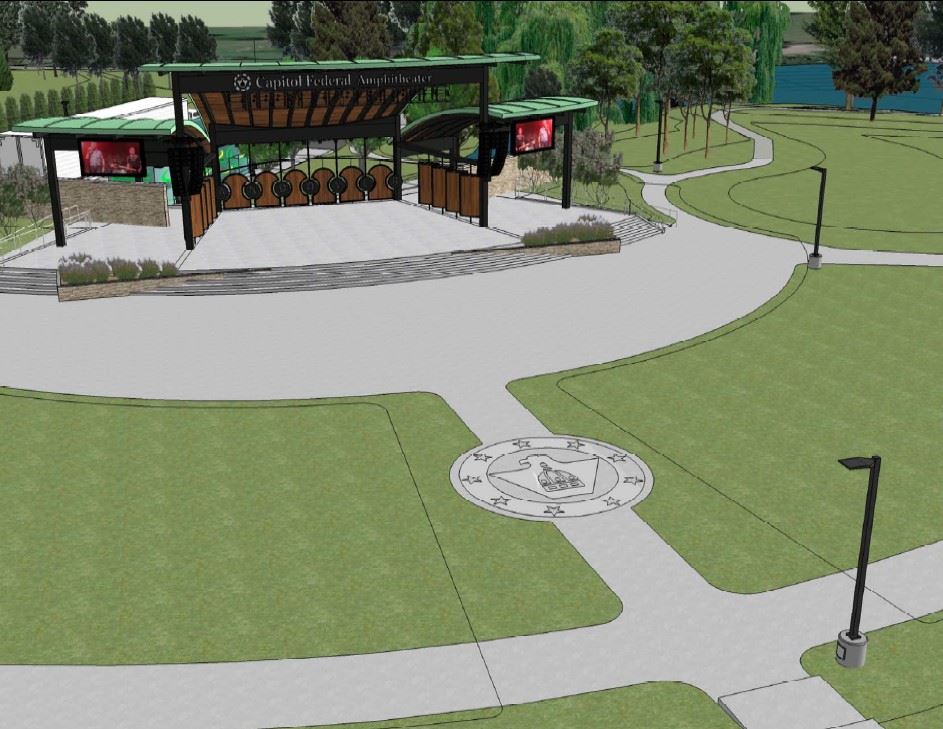 The summer Concert in the Park series stemmed from the desire of the Andover Convention and Visitors Bureau (CVB) to build a permanent outdoor amphitheater in Central Park. The CVB decided in late 2012 the best way to gauge interest in the project would be to host free summer concerts. With the huge resulting success, the CVB decided to move along with the project. The Amphitheater will serve the community by hosting everything from small events, such as band and theatre performances, to the Concert in the Park and Greater Andover Days. The Amphitheater will also be available to rent for private events like weddings and family reunions.  The following image, created by LK Architecture, is the current site plan of the Amphitheater and surrounding area. The image provides the relative position, orientation, size, and conceptual information for the amphitheater. 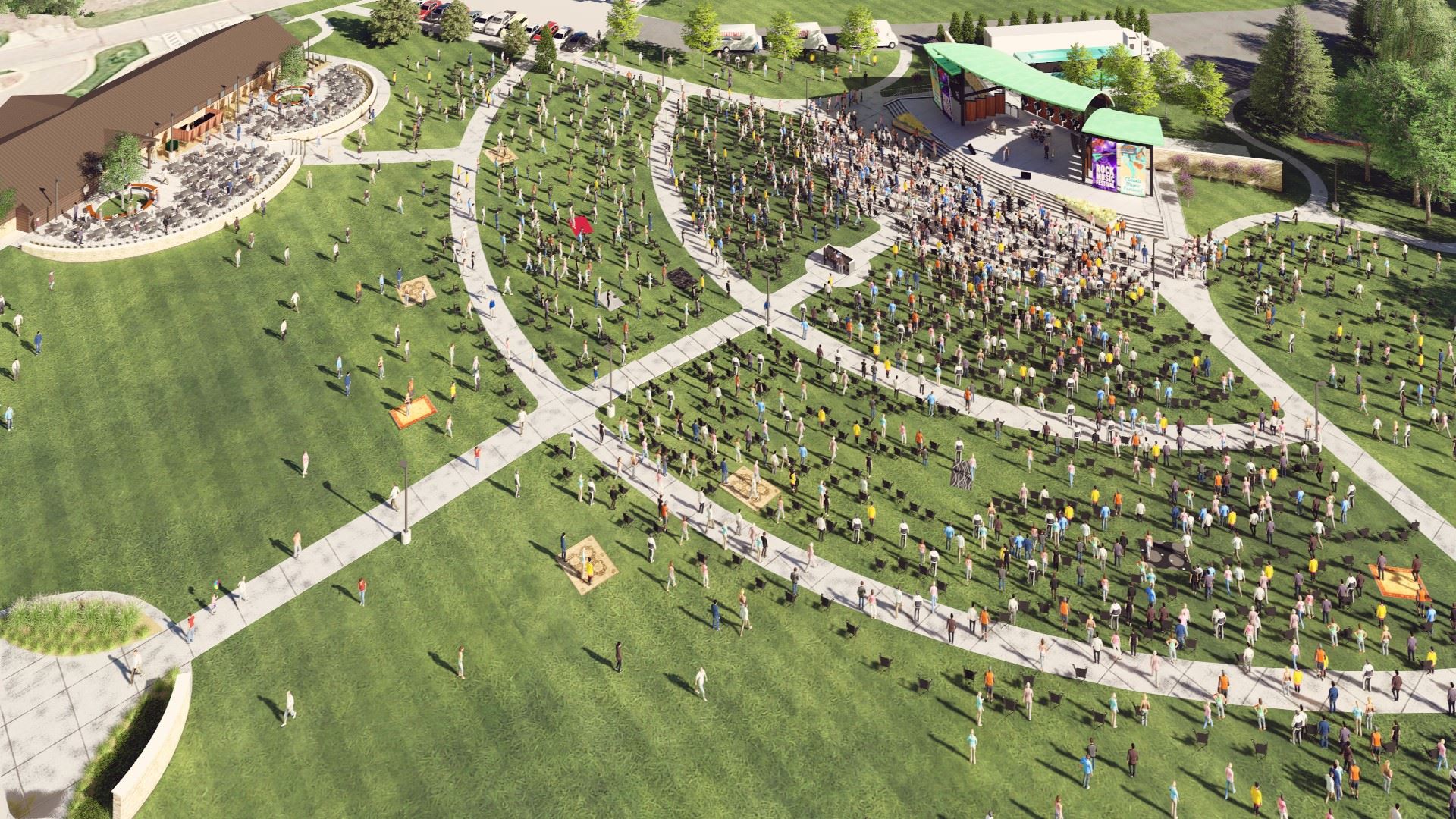