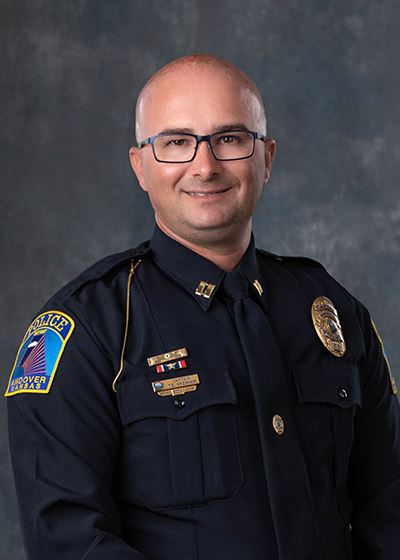 Captain Tom Gresham began his law enforcement career with the Augusta Department of Public Safety in November of 2004 where he served as a Public Safety Officer (Police Officer and Fire Fighter).  In 2013, he was hired as a Deputy Sheriff with the Butler County Sheriff’s Office.  Captain Gresham served as a Deputy in the Patrol Division and as a Field Training Officer until 2016 when he was promoted to Detective and moved to the Investigations Division.  In 2019, Captain Gresham was promoted to Sergeant and moved to the Training and Standards Section.  While serving with the Butler County Sheriff’s Office, Captain Gresham also served on the Tactical Team.  In October 2020, he returned to the Augusta Department of Public Safety.  Captain Gresham was hired by the Andover Police Department on April 4, 2022, as the Special Services Division Commander.  Additionally, Captain Gresham is a Firearms Instructor, Glock Armorer, Police Shotgun Armorer, AR-15 Armorer, and a RADAR/LIDAR Instructor.

Captain Gresham is a veteran of the U.S. Army and holds a Bachelor’s Degree in Organizational Leadership from Mountain State University, as well as a Master of Business Administration Degree from Southwestern College.